Title image: A cocktail glass sits on a wood table filled with lime slices, ice, and clear liquid. A slice of lime sits on the table nearby.

Gin, like many alcoholic beverages, began as a health tonic.

As far back as 1000 CE, there are references to monks in Italy infusing alcohol with juniper berries to treat various ailments. It is likely that these juniper-infused recipes spread throughout the network of monasteries and herbalists in Europe, sowing the seeds for what we now call gin.

At some point during the 15th or 16th century, the Dutch began distilling malt wine in pot stills and adding juniper berries. Juniper was believed to have medicinal value but also helped cover the harsh taste of spirits made by early distillation. Variations of the general formula spread with other botanicals, such as caraway and anise, and this came to be known as Jenever.

It’s important to recognize that jenever is not gin but rather its predecessor. Jenever is divided into two styles: oude (old style) and jonge (new style).

Oude jenever is made from fermented cereal grains distilled multiple times in a pot still to form a spirit, around 45% alcohol, called malt wine. Some of this malt wine is distilled again with juniper berries and other botanicals before it is blended with the original malt wine and neutral grain spirit to achieve the desired flavour profile. Oude jenever must contain a minimum of 15% malt wine and can contain up to 20 grams of residual sugar per litre. Consequently, oude jenever has a richer, sweeter, and maltier taste with soft juniper notes- somewhere between a whiskey and a gin.

Jonge jenever is a more recent style that takes advantage of the column still, not introduced until 1830, to produce pure neutral grain spirit at a low cost. Jonge jenever can only contain a maximum of 15% malt wine and must contain less than 10 grams of residual sugar per litre. Jonge jenever has a lighter profile and tends to be more refreshing and dry. This style is more likely to appeal to modern gin drinkers.

It is believed that English soldiers first began consuming jenever during the Eighty Years War. Facing the grim prospects of battle, soldiers took to drinking jenever to steel themselves and this is the origin of the phrase “Dutch courage”. The English soldiers shortened the word jenever to “jen” and over time that morphed into the “gin” we use today.

Due to ongoing conflicts with France, harsh import duties were levied on French brandy, and domestic gin production was incentivized heavily. Shoddy stills popped up everywhere.

Severe alcoholism and abject living conditions led to widespread crime, violence, and public drunkenness that spilled into the streets during the gin craze. 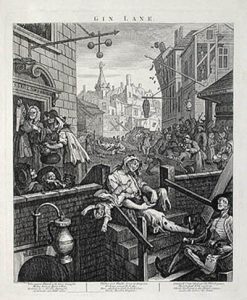 Out of the fog of the gin craze, a new style of gin emerged called Old Tom. Old Tom gin is often seen as the missing link between Dutch jenever and London Dry Gin because it is softer and sweeter than London Dry but not quite as soft or sweet as jenever. Distillers during the gin craze often cut their primitive spirits with turpentine or sulphuric acid creating diethyl ether. These adulterants and impurities contributed to the infamous crimes of the gin craze and adding liquorice and sugar to conceal these off flavours is what set Old Tom gin apart.

A series of acts increasing taxation on gin culminated in the Gin Act of 1751 and, by 1757, the gin craze had largely faded- although many historians believe the rising cost of grain and food slowed the gin craze rather than legislation.

Gin’s fortunes rallied in 1830 with the introduction of the column still which allowed for more efficient distillation. This process yielded a far cleaner distillate at a much higher purity of alcohol (generally above 90%). This new spirit was clean, crisp, and didn’t need to be sweetened to be palatable.

London Dry gin is the direct result of the invention of the column still and is typified by its dry, juniper-dominant character. Today, London Dry gin must be at least 37.5% alcohol and cannot contain more than 0.1 grams of sugar per liter. This new style of gin was much more refined and helped shed gin’s reputation as a drink for boorish commoners.

Gin’s popularity buoyed again in the late 19th century as British and European colonialism expanded. Quinine (derived from cinchona bark) was the prevailing treatment for malaria but notoriously unpleasant to drink. Tonic water was created when British officers began mixing gin and citrus juices into their quinine to make it tolerable. Sailors preferred gin over beer as beer spoiled easily and by adding a wedge of citrus to a gin and tonic they could ward off both scurvy and malaria.

The British Navy became one of the largest purchasers of gin and, over time some, merchants began watering down their bulk gin. As a result, naval officers began testing prospective barrels by seeing whether or not the spirit would burn when mixed with gunpowder. If the powder wouldn’t ignite, they weren’t buying. This led to the creation of Navy Strength gin which is generally diluted to 57.5% alcohol in order to make sure the gin would pass the gunpowder test. As the Empire spread throughout the globe, so too did the popularity of gin.

It is no wonder that gin is being made now in nearly every corner of the world. Some of these gins conform to the classic styles like London Dry, while others have drawn upon their local botanicals to create new and exciting experiences.

Traditional juniper forward styles are often referred to as Classic gins, while gins that use more exotic botanicals and focus less on juniper are often referred to as Contemporary gins. However, I feel these boundaries are more for convenience and don’t capture the diversity and energy of the modern gin landscape. Modern producers are using different combinations of stills (pot, column, rotary evaporators), different base spirits (young whisky, brandy, cane juice), and a wide variety of botanicals to offer innovative and unique expressions.

As it has throughout its history, gin continues to evolve and will offer just as much respite to the modern drinker as it has over centuries!

All this gin history made you thirsty? Check out our gin selection here.