Armagnac is France’s oldest wine-based eau-de-vie, produced in the southwest of France with over 700 years of history. Known for its therapeutic properties during medieval times, in the 17th century Armagnac rose to become an everyday household good.
At the time, the only way to transport goods was via navigable channels, thus Armagnac trading houses started to settle near the Baïse- a river from the rich Garonne. The decree of the 25th of May 1909 outlined the production zone for the Armagnac Eaux-de-Vie and its three production regions. This was followed by the decree of the 6th of August 1936 which defined the ‘Appellation d’Origine Contrôlée’ Armagnac and its production process. Unlike Cognac, which takes its name from a town, Armagnac, is named after a local sovereign family.

Founded in 1832 by the Castarède family, the eponymous Armagnac distillery is the first trading company of France declared in Armagnac. Established in the area for six generations, Castarède has developed 16 hectares of vines comprising three white grape varieties: Ugni-Blanc, Folle Blanche and Colombard. The climate is soft and humid with sunny autumns and the soil is made of siliceous clay which is poor in lime, giving Bas Armagnacs a lightness and subtlety.

Castarède has become one of the most prestigious in the appellation due to their family’s generations of traditional production, extra long ageing periods, and near-perfect cellar conditions.

Topaz and sienna in colour with orange flecks. Complex nose and flavours- “animal” notes, like leather, meld with floral notes like eucalyptus, fruit like dried fig and finally blond tobacco and praline.

The mouth effect is frank and powerful with dry fruit flavours like prunes, raisins, orange rind and almond. White chocolate flavours linger on the finish. Outstanding complexity and depth. 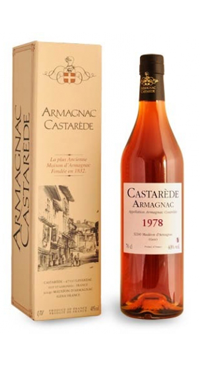 Be the first to review “Armagnac Castarede 1978” Cancel reply