With history that dates back to 1952, Cave du Roi Dagobert is a cooperative that started with 70 ha of vines but now amounts to almost 1000 ha and 250 winemakers, scattered over 20 different communes between Molsheim and Marlenheim.

The name ‘Dagobert’ originates from the winery’s geographical position which borders the former estate of the Merovingian palace in Kirchheim that welcomed the famous King Dagobert II and his court in the 7th century. The first written reference to vines in Alsace dates back to this same period. The estate was run by four royal farms located at the four cardinal points of the palace. The four villages still bear their names to this day: Osthoffen in the East, Westhoffen in the West, Nordheim in the North, and Soultz in the South. These farms supplied their wines to the Royal Palace of Dagobert II.

In the glass, the wine pours yellow and on the nose, expressive notes of dried stone fruit burst out of the glass. On the palate, more stone fruit with added ripeness lingers with a well-balanced, semi-dry finish. Use as an aperitif, pair alongside a variety of charcuterie spreads, or your favourite seafood dishes.

Edelzwicker is a blend of Alsace white grapes and Dagobert’s is made in a demi-sec style. Common Edelzwicker grapes are Riesling, Muscat, Pinot Gris, Gewurztraminer, Sylvaner, Chasselas, and Pinot Blanc.

In practice, the term Edelzwicker is commonly used to designate any blending of white AOC Alsace grape varieties, without any indication of percentage; the varieties can be vinified together or separately and the vintage year on the label is not obligatory. In the past, these different varieties came from the same parcel. Initially called Zwicker (blending), the prefix Edel (meaning noble) was added to show how only noble grape varieties were chosen and not any from large-scale producers. Edelzwicker can be made using all the Alsace white wine varieties, without having any proportion indications or constraints and can be the varieties can be vinified together or separately. 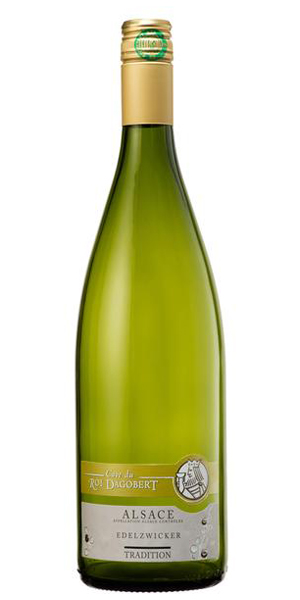