Co-founded by Dan and Margaret Duckhorn in 1976, Duckhorn Vineyards has spent forty years establishing itself as one of North America’s premier producers of Napa Valley wines. From its modest inaugural vintage of 800 cases of Cabernet Sauvignon and 800 cases of Merlot in 1978, to its addition of Sauvignon Blanc in 1982, Duckhorn Vineyards has crafted a tradition of quality and excellence that continues today.  The winery’s seven estate vineyards are located in alluvial fans of Napa Valley and the much sought after Howell Mountain slopes.

Since 2014 the wines are made under the guidance of accomplished head winemaker Renée Ary who started at Duckhorn as an assistant winemaker in 2003 and has been producing knock out wines since that time.  Winemaker Renee Ary works with each vineyard block separately and harvests when flavours are optimal and tannins are their softest. She approaches winemaking in an artisinal manner, by tasting and blending from close to 200 lots, separately barrel ageing each lot in oak from various cooperages. The result are wines of great finesse, personality and depth.

The 2017 vintage of The Discussion is a majestic and elegant wine that immediately demands attention with alluring aromas of black cherry compote, chocolate-covered blueberry, fig and cinnamon. As it opens up, hints of clove, toasted hazelnut and espresso bean emerge. On the palate, juicy blueberry, raspberry and pomegranate flavors meld with creamy oak to create a generous palate structure, with focused tannins and hints of sage and savory spice adding complexity to a long, stately finish.

Almost four decades ago, before crafting their first vintage, the Duckhorns and their winemaker had a passionate discussion at the kitchen table. Though they debated making a cuvée, they chose to focus on varietal wines. Even so, Duckhorn Vineyards has always remained fascinated by the artful blend of varietals from diverse Napa Valley vineyards an so eventually decided to produce this blend of 51% Cabernet Sauvignon, 46% Merlot, 2% Petit Verdot, 1% Cabernet Franc.  The grapes are  sourced from a range of Duckhorn’s Napa Valley Estate vineyards.  The 2017 growing season provided necessary rain and cooler temperatures at the appropriate times; the grapes ripened steadily and evenly with the harvest happening throughout September and into early October.   The grapes showed lovely ripeness and quality, yielding plush, polished and wonderfully complex wines.  Aged a total of 24 months – 18 months in new French oak followed by 6 months in neutral barrels. 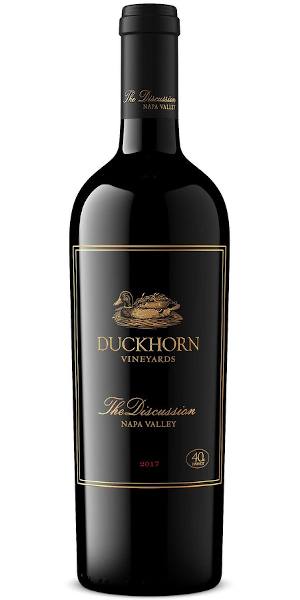