Arguably the best and most recognized producer from Fruili, the wines of Livio Felluga are sought after by connoisseurs and collectors around the globe. The story of Livio Felluga and his wines is bound up with the history of this very special land in the north east corner of the Adriatic, where the Mediterranean meets central Europe. It is a history of ever-shifting frontiers, vanished empires, passing wars and people who have chosen to remain. After the second world war, when the rural population was moving away, leaving the land and abandoning the crops, Livio Felluga faced a battle to revive the hills of the Firulian countryside. He was convinced that only high-quality viticulture could breathe new life into this region. With great courage, he began to restore old vineyards and plant new ones, introducing innovative ideas and techniques. It was hard work, but Livio Felluga set to it with the tenacity and passion that would help him in the coming years to create one of Friuli’s most impressive wineries, earning his universally acknowledged reputation as the man who re-established Friuli’s winemaking heritage.

This Friulian speciality is noted for its aromas and flavours of citrus fruits, apricot and lime blossom that intermingle with notes of flint, candied fruit and honey.

Some of the world’s best Pinot Grigio’s come from Northern Italy. The grape favours cooler climates and finds its ideal habitat on the hillsides in Collio, Friuli. Livio Felluga’s vinification technique gives the wine finesse and elegance while preserving the faint coppery highlights that characterise Pinot Grigio (it is a bud mutation of the black Pinot Noir, so this pigment is still present in the skins). 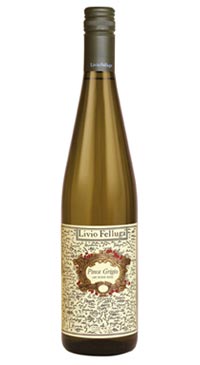