Tenuta Giorgio was founded in 1982, located in Castelnuovo dell’Abate in the south-eastern part of Montalcino in a unique position, at 400 mt a.s.l on the top of a ridge. The vines cover 26 hectares and there are 26 hectares of olive groves. The winery is located near Castelnuovo dell’Abate in the municipality of Montalcino, not far from the Sant’Antimo abbey. The winery has been part of the ColleMassari Group since 2016.  Tenuta San Giorgio was an idea of Guido Folonari, heir to one of the most historical Italian wine families, who decided to develop, in 2001 an ambitious wine project.  In a short time he found three wineries in the most prestigious production areas between Piedmont and Tuscany.  Tenuta San Giorgio is an estate Castelnuovo dell’Abbate, in a beautiful setting in the territory of Montalcino.

A dark beauty, impressing with its drinkability but also its potential. A bouquet of wild strawberry, cedar and mint leaf with a hint of licorice. A velvety texture with dark fruits that create a sense of elegance. Beautifully pure and inviting, with sweeping acidity and soft and ripe tannins that lead to a long and savory finish.  We suggest decanting the wine at least 1 hour before serving. This wine shows its best after some years of aging but is already outstanding now.  Enjoy with grilled meat, game, cheese, truffle dishes.

This wine is produced from averagely 20-25 years old vineyards, located between 250 and 400 meters above sea level, in Castelnuovo Dell’Abate, in the South-East area of Montalcino. The soil is poor and rocky, mainly composed of clay and tuff, with some mixed sandstone and marlstone at different altitudes. Viticulture is based on respectful methods toward the environment. It allows a spontaneous and balanced low production of grapes, entirely harvested by hands and carefully selected. Vinification is in oak vats, with spontaneous fermentations lead by indigenous yeasts and long macerations. This wine aged for 42 months in 30 hl Slavonian oak casks.

Ugolforte was the name of a local “Robin Hood” who led the people of Montalcino against the occupying forces in the 12th century. 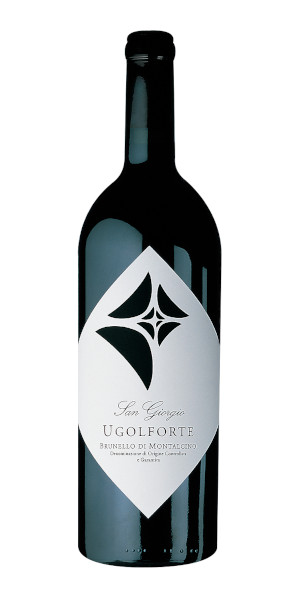