Villa Chiopris is a line of wines produced by Livon.  The history of Livon wines dates back 1964 when Dorino Livon bought his first vineyards on the hills of Collio, in Italy’s North eastern region of Friuli bordering Slovenia. He built a winery perfectly equipped with the most technologically advanced systems in order to produce high quality and fresh white and red wines. The Collio region is re-known for producing some of Italy’s most enduring white wines. Livon has a diverse portfolio of wines and has earned a reputation for crafting brilliant white wines in Collio, though their holdings have expanded to other areas in Italy. Livon produces both approachable everyday drinking white wines as well as limited production wines from designated Cru and Gran Cru sites.

Villa Chiopris, the old aristocratic countryside mansion is nestled away where the plain meets the spectacular amphitheatre created by the Colli Orientali del Friuli, and where the cool breeze that blows from the north becomes mild thanks to the influence of the Adriatic Sea close by. Up until the end of the last century the estate belonged the Hausbrandt family, an important dynasty of coffee dealers from Trieste.

Thanks to its suitable position and dimensions, the villa was used as a military hospital during the First World War. Today Villa Chiopris has returned to it original splendour thanks to the Livon family, and is now a favourite retreat for those in seek of the quintessential atmosphere of Friuli.

Straw yellow color with floral aromas (citrus blossom) and lime.  The palate is fresh, medium-bodied with a long finish.  An ideal accompaniment to seafood pasta, risotto and light greens.  Dishes enhanced by a squeeze of lemon or lemon zest really shine when paired with this wine.

Made from Pinot Grigio grapes growing on alluvial soils from the the municipalities of Chiopris-Viscone and San Giovanni al Natisone.  The grapes are harvested by machine, then steeped in a cold horizontal press for eight hours and the must is cleaned through settling.  Fermentation takes place in steel tanks at a controlled temperature of 15°C. Once the fermentation is completed, the wine is left to rest in the same tanks at a controlled temperature for about four months.  There follows a further long period of refining in the bottle before the wine is distributed. 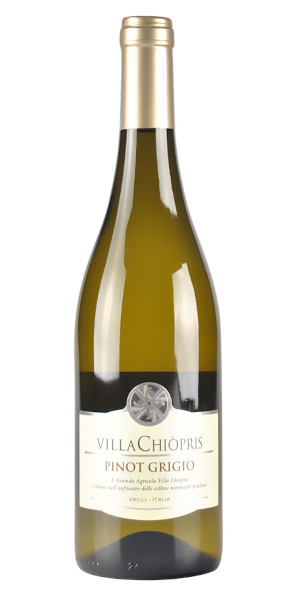