Medium hued golden colour due to some time on the skins. Aromas of honey, hay, white flowers and stone fruit.   The palate is generous with flavors of orange blossom, apricot, peach and a slight savory nuttiness.  The wine exhibits a lively freshness contained within a creamy mouthfeel.  The wine’s ability to evolve overtime requires patience; Fontanasanta Manzoni Bianco is a wine that really comes into its own at least three years after harvest.  This unique white wine can easily be enjoyed as an aperitif but is also a versatile food wine that pairs well with chicken, lightly spicy foods, rich vegetarian dishes and mature cheese.

This biodynamic wine is made from a unique grape Manzoni Bianco, which is a 1930’s cross of Riesling and Pinot Bianco.  Foradori farms close to 5 hectares of this grape at the Fontanasanta vineyard located on a stunning hill overlooking Trento at the foothills of the Dolomiti.  The grapes grow on calcareous-clay soil. The grapes are hand harvested in late September, fermentation on the skins in cement tanks followed by 7 months of aging in acacia casks before bottling. 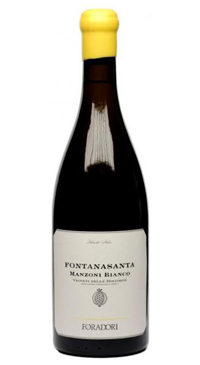