Armagnac is France’s oldest wine based eau-de-vie, produced in the southwest of France, with over 700 years of History. Known for its therapeutic properties during medieval times, Armagnac rose in the XVII century to become a convenience good.
Around 1830, the only way to transport goods was via navigable channels, thus Armagnac trading houses started to settle near the Baïse, a river from the rich Garonne. The department of the Gers became the leading French wine producer. However, the Armagnac vineyards also suffered from the scourge of the phylloxera in 1870. The vineyard got a new life at the beginning of the century. The decree of the 25th of May 1909 outlined the production zone for the Armagnac eaux-de-vie and its three regions, followed by the decree of the 6th of August 1936 which defined the ‘Appellation d’Origine Contrôlée’ Armagnac and its production process. Unlike Cognac, which takes its name from a town, Armagnac, is named after a local Sovreign family. 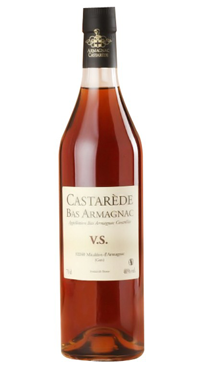 Be the first to review “Armagnac Castarede VS” Cancel reply