Jean-Marc Boillot was born in Volnay, into a family of vignerons. Between 1971-1984, he worked alongside his grandfather in Volnay, Pommard, and Meursault until a family disagreement between Jean-Marc, his grandfather, his father, and his brother led him to leave the family business and pursue his own winemaking journey. In 1988, Jean-Marc made wine in Puligny-Montrachet with Olivier Leflaive, a new négociant at the time. From there, he started making wine under his own name, acquiring plots in Beaune and Pommard- it wasn’t until Jean-Marc’s grandfather tasted his wine that their relationship began turning for the better. When his grandfather retired, he left Jean-Marc plots in Volnay, Pommard, and Meursault- as well as an unused cellar called “La Pommardière.” Cut to 1993 and another 5 ha of land was inherited by Jean-Marc via his maternal grandfather; he acquired vineyards in Chassagne-Montrachet, Puligny-Montrachet, and Bâtard-Montrachet.

“Boillot makes white and red wine with equal facility, and with equally impressive results. Few people are thus gifted, it is like being ambidextrous.” Raymond Blake, Côte d’Or.

Jean-Marc, now in his seventies, is often referred to as the ‘quiet pur-sang’ of Burgundy, and far from retiring. His son-in-law, François, is now in charge of the winemaking under the watchful eye of his father-in-law.

On the nose, notes of apple and pear, with a hint of florality and chalk. On the palate, more apple, pear, and citrus notes; its juicy with pleasant acidity and stony, minerality. Pair richer, seafood fare like lobster and/or scallops- it’ll work with richer chicken dishes, too.

Made from 100% Chardonnay, these grapes are sourced from various growers in the region.  Fermentation occurs in oak barrels with ageing on the fine lees and the wine undergoes 100% malolactic fermentation.  11 months without racking with weekly bâtonnage in 30% new oak barrels.  Fined before bottling. 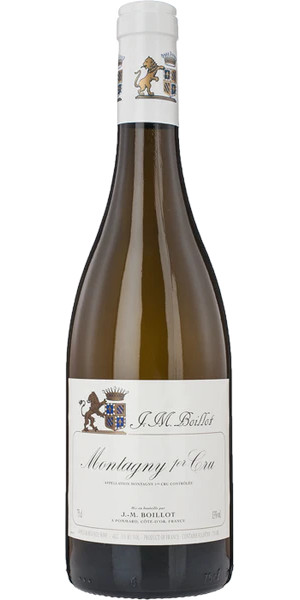