Osoyoos Larose is an iconic Canadian winery that began as a joint venture between Vincor in Oliver and Groupe Taillan, a French wine conglomerate in 1998.  Bordeaux winemaker, Pascal Madevon was recruited to oversee the project. When he arrived in southern BC, Pascal was very impressed with the quality of the grapes, the dry climate and relaxed lifestyle of the Okanagan valley, which was so unlike Bordeaux, that he soon brought his family over from the Medoc and became a Canadian citizen.

Since its inaugural release of the Le Grand Vin in 2001, there have been some changes of ownership (Groupe Taillan is now sole proprietor) and new French winemakers have come on board while others have left.  Since that time, Osoyoos Larose has humbly won over the hearts and palates of connoisseurs, the media and other winemakers.  The wines speak for themselves; unlike Bordeaux, there is no opulent chateau, or tourist attraction tasting room.

Osoyoos Larose makes only two wines like many Bordeaux estates;  Le Grand Vin, their top-tier wine designed long term aging and a second wine, Les Pétales, which is a blend made from whatever is not used in their premier wine and is more approachable earlier on. The wines are blends of the classic Bordeaux grapes – Merlot, Cabernet Sauvignon, Cabernet Franc, Petit Verdot, and Malbec.  The percentages vary depending on the vintage, though Merlot tends to dominate the blend.

Osoyoos Larose is made of a single-piece vineyard overlooking the superb Osoyoos Lake.  This is a blend of the classic Bordeaux varietals, with Merlot being the dominant grape.  The youngest vines of the 32-hectare estate are behind this cuvee, aged 16 months in French casks from one wine (60%) and from two wines (40%). 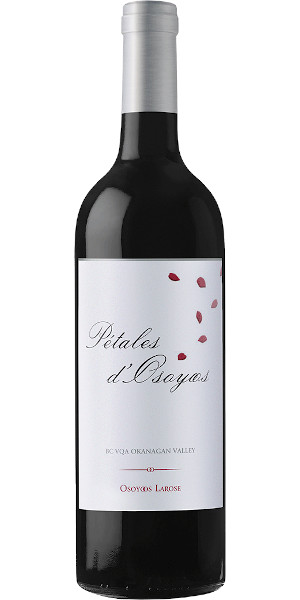