Makgeolli is an alcoholic drink made and mostly enjoyed in Korea. Made from a mixture of wheat and rice, is it sweet and milky with a clean and smooth taste. Classified and described as a ‘sparkling rice wine.’ Very traditional! Low alcohol (3%), serve chilled, and gently shake before drinking  for better taste and richer flavor.

The milky, off-white, and lightly sparkling rice wine has a slight viscosity that tastes slightly sweet, tangy, bitter, and astringent. Chalky sediment gives it a cloudy appearance. The nose can include sweet rice and yogurt, and the thick wine has a milky, creamy mouthfeel. It has low to medium acidity thanks to the natural fermentation and no tannins since it is not made using grapes. As a low proof drink of six to nine percent alcohol by volume, it is often considered a “communal beverage” rather than hard liquor.

Makgeolli is made from rice using nuruk, a Korean fermentation starter.Nuruk is a dry cereal cake that has been allowed to ferment and mature to promote the growth of molds producing hydrolyzable enzymes that decompose the starches of the cereal grain into sugar. This sugar is then used by yeast to produce alcohol through fermentation. Different kinds of nuruk, made with different ingredients such as rice, wheat, barley, or mung beans, produce makgeolli of a variety of flavors. 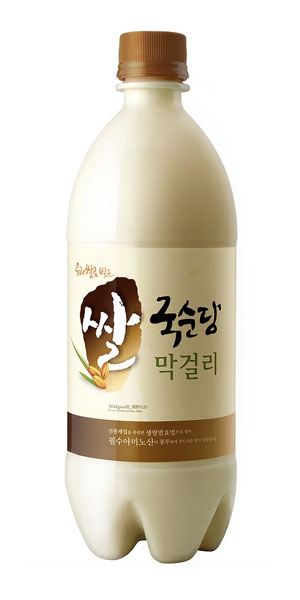 Be the first to review “Ssal Makgeolli” Cancel reply