Chartreuse is named for the Grande Chartreuse Monastery near Grenoble, France, and the Carthusian monks who produced and popularized the alcoholic beverages we now refer to as “Chartreuse” in the mid 18th and early 19th centuries. Though the familiar versions trace their roots to the 18th century, the original manuscript from which they derive dates back to the 16th century and was given to the order in 1605 by Marshall Francois Hannibal d’Estrées. The original manuscript contained over 130 plants and herbs and was intended to be an elixir for prolonging life but many of the ingredients were unidentified. The erudite manuscript was guarded by the order but remained largely a curiosity for nearly 100 years.

At the start of the 18th century, the monastery’s Apothecary Frère Jerome Maubec set himself to deciphering the manuscript and by 1737 he had adapted and substituted his way to a workable recipe. Given the complexity and scale of its ingredients, this tonic was very limited and only used for its medicinal qualities by the monks and the surrounding villages reachable by mule. This much stronger (69% ABV) tonic is still being made by the monks today and is sold under the name Elixir Vegetal de la Grande-Chartreuse though considerably less popular than the familiar Green and Yellow varieties.

The renown and demand for the Elixir Vegetal de la Grande-Chartreuse grew over time and its adherents developed a taste for the complex herbal tonic. The monks realized this was a huge opportunity and introduced a milder more palateable version of the tonic (Green Chartreuse) in 1764 and an even milder and sweeter version (Yellow Chartreuse) in 1838. The popularity of these milder versions quickly spread throughout France and abroad and to this day the production of Chartreuse Liqueur remains the primary form of financial support for the Order.

Yellow Chartreuse has a noticeably sweet honey and wild flower aroma that gives way to delicate herbal notes of clove and liquorice with a subtle citrus underpinning. The palate is rich and sweet echoing many of its aromas but wrapped up in a gentle velvety mouthfeel that makes it delicate despite its complex herbal character.

Yellow Chartreuse is wonderful on its own but is also a great way to add instant depth and complexity to a wide variety of stirred cocktails and spritz drinks.

Much of the production of Chartreuse is a closely guarded secret of the Carthusian monks who make it. In fact, even within the Order, there are only two monks who select, crush, and mix the various herbs and botanicals for the recipe. These ingredients are left to macerate in alcohol prior to being distilled. After distillation, the spirits are aged in massive oak casks in the longest liqueur cellar in the world for several years to mature.

Yellow Chartreuse is bottled at a lower percentage of alcohol (40% ABV) than the Green (55% ABV) and has a much sweeter and more delicate blend of ingredients as well.

It’s almost hard to believe but the colour of both green and yellow Chartreuse is completely natrual. The striking colour is achieved through the maceration of their ingredients without use of artifical colours, flavours, or preservatives. The colour is so unique that “chartreuse green” and “chartreuse yellow” are both vernacular expressions for their respective hues and have been since the 19th century. 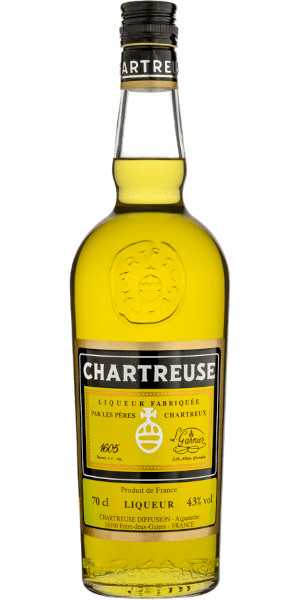 Be the first to review “Yellow Chartreuse 750ml” Cancel reply