Building started for the Ardnamurchan distillery in 2013 and it launched its first-ever single malt Scotch whisky in late 2020. It is one of the most remote distilleries in Scotland, it is a 90-minute drive from Ft. William along winding almost single track road on the unspoiled and untamed Ardnamurchan peninsula. Ardnamurchan was established by Adelphi Distillery LTD, an independent bottler named for a distillery which closed in 1902. Realizing the supply of whiskies for independent bottlers was tightening up, they made the decision to open their own distillery.

From the distillery: A true reflection of our rugged Western Highland location, the whisky boasts notes of oyster shell, campfire embers, waxy peel, honeycomb, strawberries with black pepper and a lingering maritime finish.

Ardnamurchan’s Single Malt Highland Scotch Whisky is made with a blend of 50% peated and 50% unpeated single malt whisky that was matured in a combination of 65% Ex-Bourbon casks/ 35% Sherry casks. Bottled at 46.8%.

Nose: Expect ripe, green apple, salty sea air, and damp earth. This scotch smells like you poured a bottle of maple syrup into a pile of sawdust, but in a very charming way.
Palate: Pleasant sweetness upfront, the palate is light but very textured and woody; think salted caramel and dark chocolate. This is an easy drinking, breakfast Scotch. 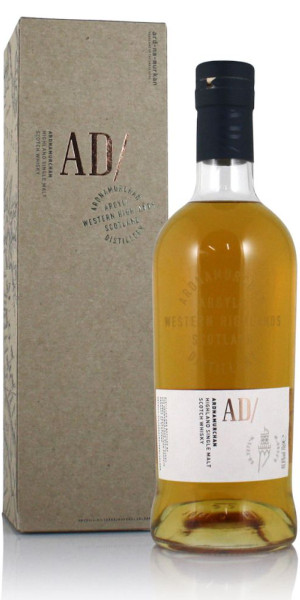