Named after a famous distillery that made whisky from the early-18th century until 1925- when it was mothballed (a term referring to a distillery being closed while still preserving equipment and machinery for possible future use), Hazelburn single malt is produced at the Springbank distillery. First licensed way back in 1828, Springbank didn’t begin producing triple-distilled whisky until 1997; the first Hazelburn whisky was bottled in 2005 as an 8 year old and the core range now features a 12 year old and 10 year old, both first released in 2009 and 2014, respectively.

By using unpeated, air-dried malt and triple distillation on two stills, the produced spirit is light, fruity, and subtle. 10% of Springbank’s production is dedicated to the Hazelburn brand, with another 10% focused on their Longrow bottlings- the other 80% is for the rest of the Springbank range.

From the distillery: On the nose, an initial temptation of manuka honeycomb, vanilla and fudge melt away to reveal stewed pears, baked apples, crumble topping and nougat. On the palate, the triple distillation ensures this is a smooth and elegant dram, with the bourbon maturation providing rich vanilla and milk chocolate flavours alongside refreshing honey and zest notes. The finish is a refined milk chocolate and creamy finish which gently fades away, allowing enough time to refill your glass and repeat.

Nose: There’s no doubt that this whisky is triple distilled because the nose is so fresh and so clean; reminiscent of freshly cut oak, apple, pears, lime zest, and some added sea salt.
Palate: Round with an oily mouthfeel; fruity, soft, and easy but very lively all at the same time. It’s all capped off with a long, fruity finish- nothing to complain about here! 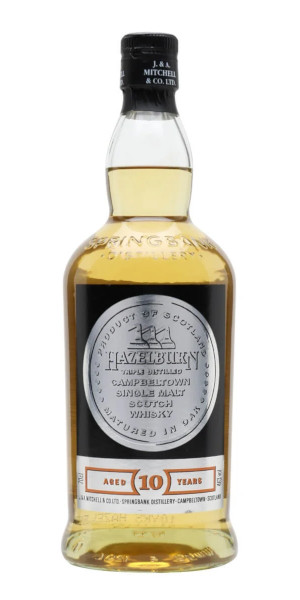 Be the first to review “Hazelburn 10 Year Old” Cancel reply