Situated in a town called La Miel near the Andes in Venezuela, Distilerias Unidas produces a variety of distillates but is certainly best-known internationally for their phenomenal rum. Ron Diplomatico Exclusiva has become something of a standard-bearer for modern Venezuelan rum as it is one of the most awarded rums in the world and frequently tops both tasting panels and consumer reviews.

An exceptional 47% ABV rum that has a wonderfully pungent nose, the subtle aromas of dried and candied fruit combining with the rich, powerful aromas of vanilla, spices and cane syrup with a little smokiness in the background. On the palate the characters from the aroma persist but give way to a powerful, complex combination of dark chocolate, aged dried fruit, coffee and vanilla, all with a lovely creamy mouth feel. The finish is long, warming and powerful.

Diplomatico is made entirely from molasses and sugar cane honey from local sugar processing plants and has a much higher concentration of sugar than most rum producers have available to them. The result is an exceptionally rich and sweet rum that never fails to turn heads.  Diplomático Ambassador rum is an exquisite rum crafted from the distillery’s best rum reserves. After a minimum of twelve years of aging in white oak casks, until optimal maturity is achieved, the rums are aged for two additional years in Pedro Ximénez sherry casks, contributing to Ambassador’s complex sensory profile. 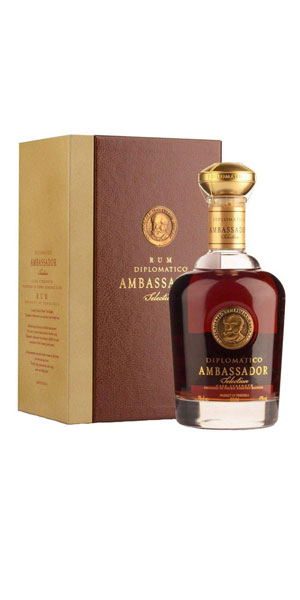 Be the first to review “Ron Diplomatico Ambassador” Cancel reply