Soon after he met Monica and they began discussing their plans for the future. Monica’s grandmother and greatgrandmother had made mezcal back in the day, and her family still enjoyed Tequila after every meal. They considered trying to import and private label a tequila but simply couldn’t find anything they liked enough. They hooked up with Alex’ old friend Chris Matte who he had recorded with in the past and decided they would make their own tequila instead.

Siempre Tequila Plata has a beautiful nose of roasted agave, grilled lime, pepper, and damp clay that give way to wild flower honey, lemon cake, and grassy flavours. The finish is silky and smooth with vanilla and pepper that linger without any heat.

Forget the cocktails for this one, it is best just to sip. Though if you must, prepare for the best margaritas of your life!

Although the distillery is in the Lowland town of Tequila, they use a blend of blue webber agave from the Arandas region of the Highlands and the local Lowlands to create a profile that is both sweet, floral, and fruity while also earthy and peppery. The agave is hand harvested and slow cooked in traditional brick ovens for days before it undergoes a slow natural fermented in open air fermenters. After fermantation, it is double distilled in alambic pot stills, and brought to 40% alcohol by volume using the local natural volcanic spring water and bottled by hand. 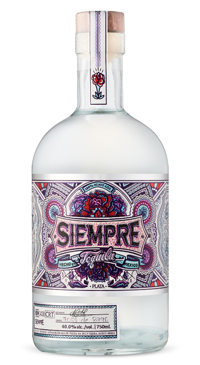